If we collect independent pairs of observations from some bivariate distribution, then how can we estimate the expected squared perpendicular distance of each such point in the 2D plane from the 45-degree line?

Assume that the random two-dimensional vector follows a bivariate distribution with mean , and covariance matrix with entries , and .

see the figure below. Thus, the expected value of the squared perpendicular distance times two (for notational convenience) is given by,

To answer the question raised above, we can estimate the value of equation based on pairs of observations substituting the respective sample mean, sample variance, and covariance estimates for respectively. 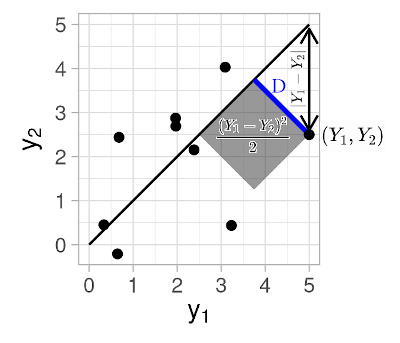 That’s great, but why should we spend any time thinking about the expected distance from the 45-degree line? What’s interesting about it?

… A measure of distance from the 45-degree line naturally quantifies the (dis)agreement between the two sets of observations. For example, we may have measured the same target entities using two different measurement instruments, and may want to know if and to what extent they agree.

Towards quantifying the extent of the (dis)agreement between two sets of observations it is natural to try to scale (or normalize) the quantity of equation to the range . However, it turns out that, rather than scaling to a range, it is customary to scale this quantity to the range from -1 to 1 as follows,

This expression, first introduced by (Lin, 1989), is known as the Concordance Correlation Coefficient, abbreviated as CCC hereafter.

Further aspects of the relationship to the Pearson correlation coefficient become visible if we rewrite the CCC further into the following set of equations.

From equations and we observe that:

Now it turns out that the Pearson correlation coefficient has one major shortcoming when assessing reproducibility of measurements, such as when comparing two instruments that measure the same target entity.

Unlike CCC, is invariant to additive or multiplicative shifts by a constant value, referred to as location shift and scale shift respectively in the following set of figures: 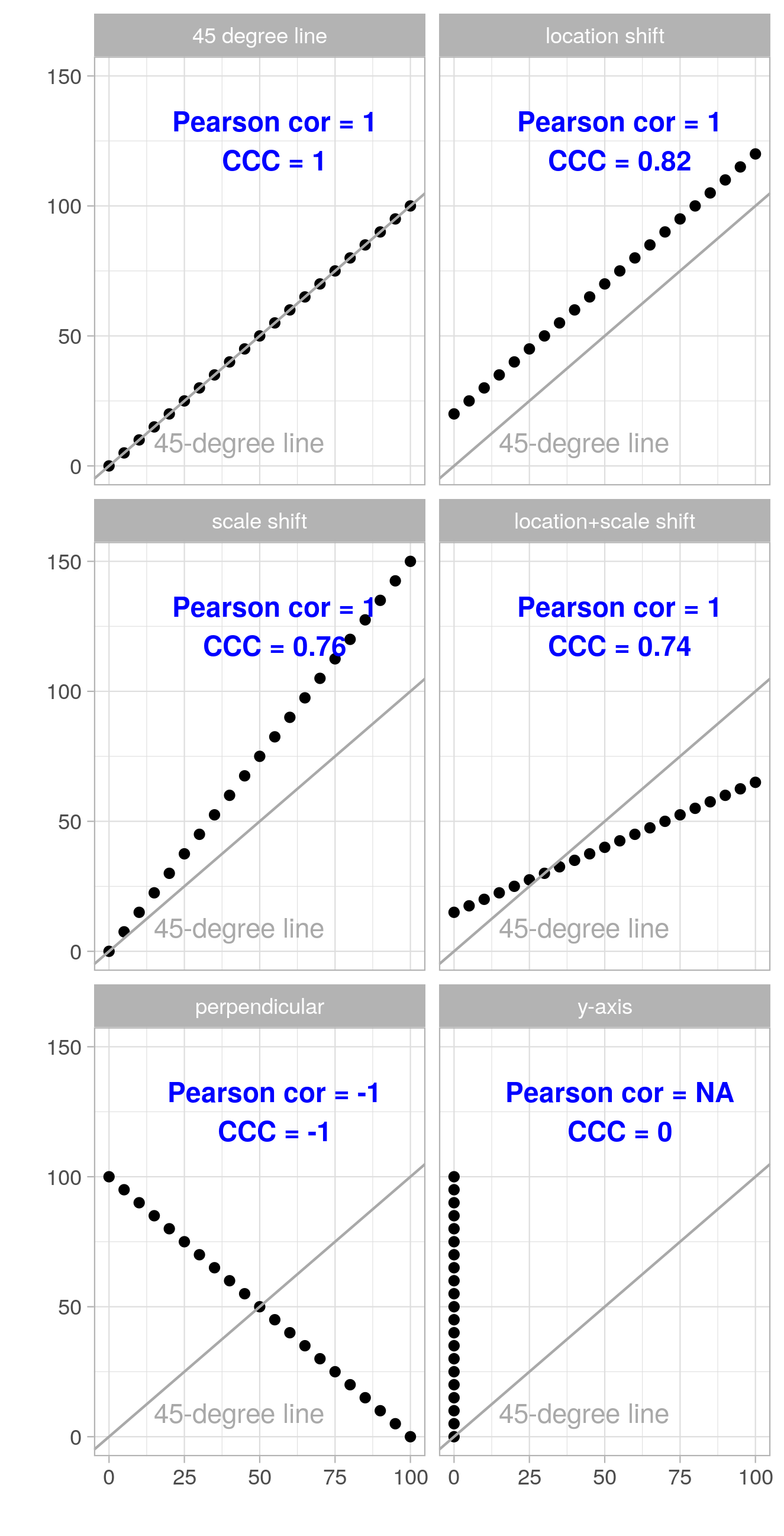 The following figures show the same examples where both the and the coordinates are augmented with Gaussian noise (mean 0, standard deviation 15; the same realization of the random noise is used within each subfigure). We see that both and CCC move further away from the extreme values of , , and as noise is added. 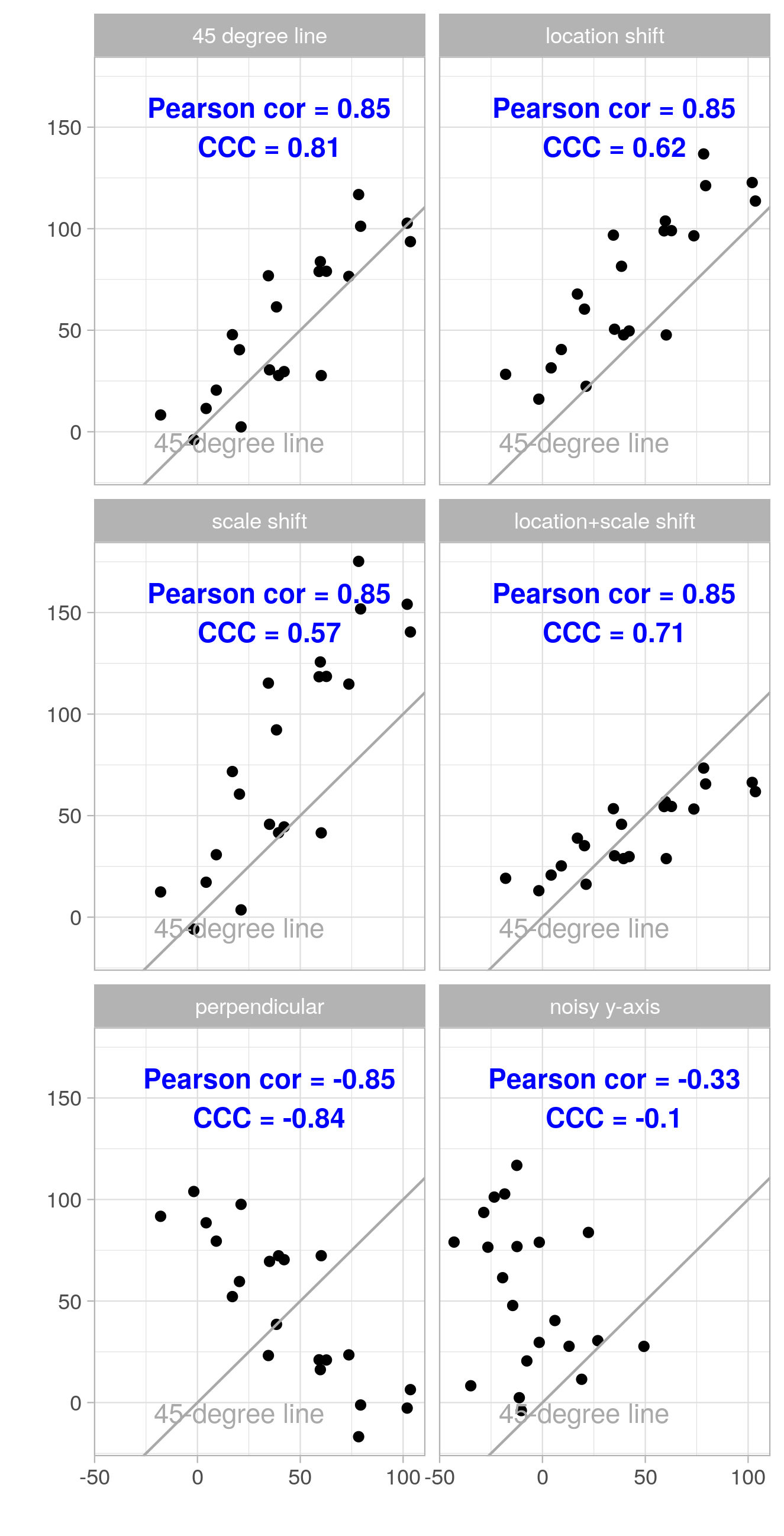 (2) Can an in-vitro assay for screening the toxicity of biomaterials reproduce from trial to trial?

And indeed this type of reproducibility assessment is a task where CCC has some clear advantages over the Pearson correlation coefficient, as seen in the figures above, as well as over some other approaches, as discussed in (Lin, 1989) in detail. A couple of shortcomings of common statistical approaches (when applied to the reproducibility assessment problem in question) are the following:

I will end here. However, if you want to go deeper into the topic I invite you to check out the original paper by Lin for a more thorough discussion of the merits of the CCC as well as for its statistical properties. Moreover, since the publication of (Lin, 1989) there of course has been follow-up work, which I didn’t read (so, I may update this blog post in the future).