The following shows an application of class LMM from the Ruby gem mixed_models to SNP data (single-nucleotide polymorphism) with known pedigree structures. The family information is prior knowledge that we can model in the random effects of a linear mixed effects model.

I have simulated realistic SNP data with the simulation software SeqSIMLA, using the software cosi to generate a reference sequence, as advised in the SeqSIMLA tutorial.

The response variable is a quantitative trait with mean 10 and variance 1. In total there are 130 SNPs in the data set, and SNPs 1, 3, 5 and 11 are selected to be causal, explaining 10%, 20%, 20% and 10% of the variance in the quantitative trait. Additionally, 35% of the variance is explained by shared environmental effects, and the remaining 5% by individual environmental effects. The correlation coefficient between spouses for the shared environmental effects is set to 0.8, and the respective correlation coefficients between parent and offspring as well as siblings is set to be 0.5. The data is available for ten families of twelve individuals each (i.e. 1200 subjects total). All families have identical pedigrees, which look like this: 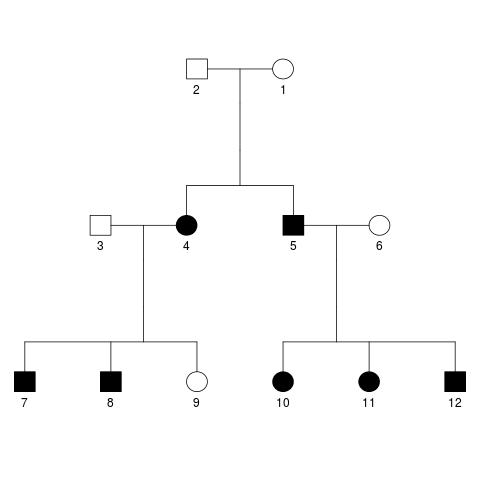 The exact parameters provided to the SeqSIMLA software can be found in a text file in the repository. Additionally, I have preprocessed the SeqSIMLA output slightly and extracted the kinship matrix, both using a short R script.

We model the quantitative trait (a vector of length 1200) as,

If we denote the kinship matrix by , then we can express the probability distribution of as

where we multiply by because the diagonal of is constant , and where is a scaling factor.

The goal is to estimate the unknown parameters , and , and to determine which of the fixed effects coefficients are significantly different from 0 (i.e. which SNPs are possibly causing the variability in the phenotype).

Fit the model in Ruby

First, we need to load the generated design matrix , the response vector , and the kinship matrix .

Now, we can try to fit the model.

Instead of using the user-friendly method LMM#from_formula to fit the model, we will fit the model with raw model matrices directly using LMM#initialize. While LMM#from_formula mimics the behaviour of the function lmer from the popular R package lme4 (see my previous blog posts), LMM#initialize gives more flexibility to the user and allows for less conventional fits, which (to my knowledge) are not directly covered by lme4. This flexibility comes in form of an interface, where the user can supply the parametrization for the triangular Cholesky factor of the covariance matrix of the random effects in form of a Proc object or a block (which probably would not be as nice syntactically in most other languages as it is in Ruby).

Before we call LMM.new, we also need to define the random effects model matrix (which is the identity matrix in this case), find the Cholesky factor of the kinship matrix , and specify the column names for the SNP matrix . These steps and the model fit are performed by the following Ruby code.

It takes a couple of minutes to run.

We can start by looking at some parameters describing the model fit:

(I know, not very meaningful to look at… At least, we see that the optimization method converged.)

Now, we might be interested to see which of the SNPs explain the variation in the quantitative trait best. To this end, we print those SNPs to the screen, which have a Wald p-value less than 0.05 (I have written before about Wald Z tests not being adequate, also see update below).

Because the data is simulated, we know that the true causal SNPs are #1, #3, #5 and #11. The model only picked up SNP #11 among those. However, this is not surprising, because SNP data is highly correlated. The selected SNPs are probably highly correlated to the true casual ones, and because of random fluctuations, in this particular data set they probably happened to explain the response better than the true causal SNPs.

Also, it might be of interest to see just how much of the remaining (not-explained-by-SNPs) variability of the response is explained by family relatedness as compared to individual random fluctuations of each subject. We address this question by comparing the estimates of and .

Because is the scaling factor of the Cholesky factor of the kinship matrix , and the covariance of the random effects is given by

We see that as expected from the SeqSIMLA input parameters mentioned above, the family relatedness influences the total variance of the trait a lot more than individual non-genetic factors.

Due to the size of the data (1200 observations of 130 variables) the 1000 performed bootstrap simulations ran for more then 10 hours on my laptop (Intel Core i5 processor of fifth generation). Instead of examining all confidence intervals, I only print those which do not contain zero, using the following code.

As the Wald Z tests above, the studentized bootstrap method detects only one of the true causal SNPs #1, #3, #5 and #11. As explained above, this happens because of very high correlations between the SNPs.

Another question that we may want to answer is how similar the results of the studentized bootstrap method are to those of the Wald Z tests. To answer that question we look at the intersection of the two sets of selected SNPs. The code